Camerado producer director Jason Rosette brought his charming English mum (who lives in Orlando) and talked up his Cambodian documentary, Vuth Learns to Rock, which is in the International shorts program of the festival. He's making plans to document the efforts of Cambodian translators/publishers to grapple with the Jack Kerouac classic, On the Road. How will his mad "bop" ramble translate? The local Jack Kerouac House project should hook up with him. That sounds like a funny film, even if you have to read subtitles to know how much trouble the translators have.

Full Blog at-->http://blogs.orlandosentinel.com/entertainment_movies_blog/2009/03/fla-film-festday-one-parties-and-management.html
Posted by CAMERADO at 10:03 AM

Join Camerado's Jason Rosette (director, "Vuth Learns to Rock", heading out all the way from Phnom Penh Cambodia) and other filmmakers at the 2009 Florida Film Festival's FILMMAKER FORUM--

Friday, April 3, 1:00 PM - 2:30 PM at Regal
"The Florida Film Festival hosts some of the hottest new independent filmmakers every year and always sets aside one day just to pick their brains. This lively and dynamic exchange of ideas and lore inevitably defines a high point in the festival--peppered with tales of triumph, challenge, and creative methods. Don't miss a once-in-lifetime airing of artistic laundry by the filmmakers who get the job done. Moderated by Chris Gore, Founder/Publisher of Film Threat, TV host, filmmaker, and author of The Ultimate Film Festival Survival Guide."
Posted by CAMERADO at 12:36 PM 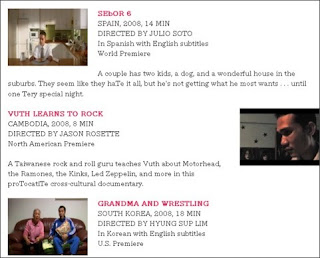 ...a couple screen grabs from the Florida Film Fest's Int'l shorts program where "Vuth Learns to Rock" will screen, April 3 & 5th:
Posted by CAMERADO at 4:33 AM

LOST IN NEW MEXICO: the strange tale of Susan Hero is an independent feature film made in the state of New Mexico. It is the second feature length movie by Camerado...please visit the dedicated Lost In New Mexico website at: http://www.lostinnewmexicomovie.com
Posted by CAMERADO at 8:05 AM

A Taiwanese rock and roll guru teaches Vuth about Motorhead, the Ramones, the Kinks, Led Zeppelin, and more in this provocative cross-cultural documentary.

This atmospheric and moody no-budget feature shot around the city of Albuquerque is aptly marketed by its resourceful director as "a sci-fi cloning road movie for the 21st century." Rosette's timely fusing of diverse genre elements involves no less diverse a cast of characters: Susan, a grieving young woman who robs the movie theater at which she's employed so she can pay for the cloning of her recently deceased daughter; Dr. Morell, a maverick geneticist bent on extending the reach of his illegal cloning services; Javier, an illegal Mexican immigrant accompanying Susan; Carl (played by Rosette), a self-doubting FDA agent on the trail of Morell; and Lonnie, a Native American potter trying to raise funds so his daughter can attend college. Rosette (Bookwars, LJ 10/1/00) envelops these characters in the evocative desert landscape, complemented by a wistful and spare guitar soundtrack. Extras include a production slideshow with the director eloquently detailing the film's difficult history. Recommend for adventurous viewers.—Robert A. Sica, Eastern Kentucky Univ. Lib., Richmond

:: Updated List of Camerado Movies (& More) and Where to Purchase ::

THE CRUNCH
Alt rock album
Purchase from Createspace at: https://www.createspace.com/1702984