Ah--actually, I successfully completed my contract at RUPP's DMC (contrary to what ex-co-director Martin Kroeber had stated) 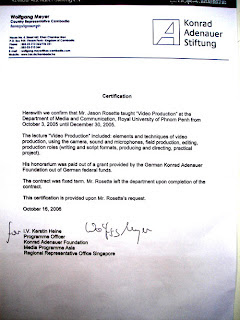 This one has been a long time in coming, just have been busy straight through for over a year, and didn't have a lot of extra time to do lower priority items, like blogging, etc.

Basically, it all dates back to the semester I taught a video production course at the Royal University of Phnom Penh's DMC--Department of Media and Communications.

The co-director at the time, Martin Kroeber, supplied by the Ded (or DAAD?) as a visiting "professional scholar", had been telling a lot of folks that I resigned as an instructor there, that I did not leave in good form.

I found this out a while later when speaking to the head of the German development organization who funds the program, while poking around for more lecturer work around Phnom Penh. Even the current Khmer co-director of the DMC had been under the same impression--that I had resigned. It's dissapointing that other lecturers who had been present throughout my term and its successful completion (see below) did not take any initiative to correct this misinformation.

As a result, I asked for--and received (but with great resistance on the part of Martin Kroeber)--this statement from the Konrad Adenauer Foundation, stating conclusively and without argument that I completed my contract in 100% proper form, that I was not fired, and that I did not resign (amazing it's even necessary to have to write this...!)

Now, why would Martin stoop so low as to blatantly lie about a lecturer at the school, so willfully try to damage that person's reputation when they'd put so much into the program?

I had, after all, designed from scratch the DMC's very first introductory video production course, helped install equipment and tech same, design a theoretical component, built up their DVD library, etc, etc etc.

(Apparently, though, I wasn't he only person who had problems with Martin; several folks had problems before me, one had quit because of him, etc.)

Upon successful conclusion of my term, during which time many of my students had gone from never even holding a video camera, to making some incredible documentary (and some fiction) work, I thought it would be a great and mindblowing way to end the class if I were to somehow take my students to the Bangkok Film Festival and Market, which I'd attended the previous year and which was about to take place again.

I knew the person who ran the Market and I figured that, if I could somehow pull off a field trip like that, it would be a great and fitting way to end the course.

So, first I inquired with my old contact there at Bangkok to see if I could get any passes for my students (normally they're $200 or so each) Graciously, she granted us 20 passes--about $4000 dollars worth of in-kind contributions.

Next, and most crucially--and fatefully, as it would turn out--I went to Martin and pitched him the idea. Sitting with us in the room was another lecturer, Isabel Rodde, who'd arrived at the DMC not long after I had.

So, with both Martin and Isabel present, I pitched the idea to take my students to the Bangkok Film Festival and Market. Martin didn't even realize the Bangkok Fest would soon be taking place, while Isabel remained dryly skeptical of the idea.

Nevertheless, I received the A-OK from Martin, and I began to engineer he project, continuing to utilize my contacts at the Bangkok Fest and Market in order to make the field trip an incredible success.

The problem was: the field trip became too much of a success. As the project took on luster, as I continued to coordinate and produce it, more and more folks made their way onboard. The Thai embassy because involved, and then it became even more high profile...

Still, at one point Martin took me aside and assured me: "don't worry, this is still your project".

So I continued to pour in more time and effort, to utilize my own contacts, even though I'd completed my contract already and by now was working for free to make the project happen.

Soon, even old Isabel decided she wanted to attend as well, even though she had remained so skeptical when I first pitched the idea to Martin.

One night, as I was in my kitchen, I received a text message that "Deep", a guy whoe worked with the BBC and lectured at the DMC, also wanted to come on board. I texted Martin back that, while I wasn't opposed, I thought we should all meet and determined what role each of us would take.

Martin then texted back "Not your project any longer. This is a University project"

Never mind that I'd put so much time and effort into it, or that it was my idea. Never mind that I had persuaded and cajoled my contacts in Bangkok into providing $4000 worth of in-kind assistance to get the ball rolling...

Regrettably, at no time did my only other colleague who'd been present (Isabel Rodde) take a stand and say "hey, Martin, you know this was Jason's idea; this is his project." That would have been an honorable and highly appreciated intervention.

Clearly, though, Isabel did not want to risk a free pass to the Festival and Market--which I'd secured for my students actually.

So I stepped away from the project. I decided that I'd attend the Fest and Market instead with my company Camerado, and with Associate Producer Chan Norn; we both attended and Camerado was the first company from Cambodia ever to go to the Film Market (with a booth there as well), promoting the Cambodian Film Scene as well as ourselves.

(That's, by the way, where I met Mariam Arthur of FilmCambodia.org who was helping out at the Market; not long after that, Mariam had her own plans to come to Cambodia to cultivate the movie scene).

Anyway, as a result of stepping away from the project which I had put together, my students were completely baffled; they would not conceive of WHY the person who had 1) come up with the idea and 2) produced the event could now no longer be attending with them.

In order to avoid explaining myself to every single one of my students, I wrote a letter to them, explaining everything that happened. They were perplexed, and had not foreseen that such university politics could ever take place on that level.

During this time, I stood alone, explaining myself as best I could. Not once did any other colleague from the DMC come forward and take a stand to clarify the situation. Again, Isabel was now no longer skeptical about the trip: she would be attending with a Festival and Market pass and would be staying at a luxurious hotel in Bangkok. (she never did actually even offer a word of thanks...nice!)

Anyway, when my students finally caught a glimpse of what had actually happened, Martin flew into a frenzy. He soon began propogating the notion that I had resigned from the DMC--which is, again, entirely untrue as per the statement from the Konrad Adenauer Foundation.

If anything, I brought glory to the school via the field trip to the Bangkok Film Festival and Market which I conceived and produced. Yet, in the end, I had to fight tooth and nail to get this letter from the Adenauer Foundation stating without doubt that I had 100% fulfilled the terms of my contract, that I did not resign--despte the baffling and unfortunate insistences of Martin Kroeber, ex-co director of the DMC at Royal University of Phnom Penh.

[I will also forego mentioning that, prior to all this and several months earlier, Martin had dashed off to Germany for Christmas vaction for several weeks--conveniently forgetting to pay his lecturers, including myself! All email to him went unanswered for two weeks...I took another emergency job as an English teacher, since he wasn not responding to emails and I had to assume the worse.)

A couple weeks later, he text messaged me to tell me he "was back...and by the way, I need the attendance rolls urgently!" When I spoke to Martin about this, he failed at first to realize what he had done wrong--although he himself finally conceded this was not proper behavior.]
Posted by CAMERADO at 5:57 AM