'FREEDOM DEAL: The Story of Lucky', Camerado's new supernatural historical drama set in Cambodia in 1970 during the US-Vietnam War's 'Cambodia Incursion' - and told, strikingly from an Asian point of view - is now available on home use VOD on REELHOUSE. 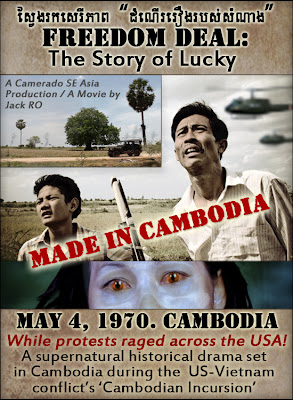 Due to numerous ongoing worldwide requests,  FREEDOM DEAL: The Story of Lucky, the first-ever dramatization of a never before seen intersection of Western-Asian history is now being made available on Home Use VOD (Video on Demand) simultaneous to its ongoing festival and academic/library circulation.

While the ideal environment for this striking genre-busting Asian movie remains the theatrical large screen (*see http://www.freedomdealmovie.com/ for screening schedules) a superb alternative for folks without access to the movie in a festival environment, or who don't want to wait to see it, is available now on sparkling HD on REELHOUSE.


This unique Cambodian Southeast Asian multi-festival selected film is best seen in a group theatrical environment with full frame HD; so, check the 'FREEDOM DEAL' website at http://www.freedomdealmovie.com to keep an eye on screening dates as well.

FREEDOM DEAL: The Story of Lucky
A Camerado SE Asia Production
A movie by J "Jack RO" Rosette
Posted by CAMERADO at 9:31 PM


'FREEDOM DEAL: The Story of Lucky', (RT 25:00 Release 2013), an historical dramatic movie made in Cambodia Southeast Asia and set in 1970 during the US-Vietnam conflict's 'Cambodia Incursion', has been selected to the following festival events:

Others Pending & Added As They Are Announced...

Contact camerado@camerado.com to view an online screener before purchase


Some Street Language
Suitable for High School and Up [PG-13]

SYNOPSIS: the gritty world of New York City street booksellers told in a remarkable story that chronicles their lives and loves and their unique  perspectives on life.

Made on location on the streets of New York by a New York City street bookseller during then-Mayor Rudolph Giuliani's 'quality of life' campaign, 'BookWars' is a pioneering first-person documentary made about the public forum of New York and the USA during that transitional time.

(Matt Seitz, New York Film Critics Circle)
" In BookWars, a superb nonfiction film by first-time feature director Jason Rosette, books are more than sources of knowledge. They are merchandise that’s appraised, bought and sold. They’re also artifacts, sometimes clean and intact but more often damaged, whose condition at the point of sale says plenty about the conscientiousness of the seller. Most of all, they’re an addictive substance." See complete review @ http://www.bookwarsmovie.com/reviews_pr/page4/page4.html

(Kevin Thomas, LA Times)
"The Laemmle Theaters' "Documentary Days" continues Saturday and Sunday at 10 a.m. at the Sunset 5 with Jason Rosette's terrific "BookWars," in which he reveals the world of his fellow used booksellers who line a stretch of pavement on Manhattan's West 4th Street in Greenwich Village and around the corner on the Avenue of the Americas. Free spirits who've dropped out of the rat race for various reasons, all are striking individuals, some decidedly eccentric.

(Michael Agger, The New Yorker)
A gritty, low-fi documentary about Manhattan's street booksellers which abounds in fascinating detail. The director and narrator, Jason Rosette, shows how bookselling is the kissing cousin of another urban art form: drug dealing. Both require a knowledge of profitable corner locations, an experienced eye for for potential addicts, and a steady supply of mood-altering substances. In the case of books, you want to be holding works by Carlos Casteneda and Kurt Vonnegut, perennial best sellers on the street. It's a hardscrabble existence: most street booksellers do not vend stolen books; they rely on church fairs, garbage-picking, and the state of New Jersey-"land of the two dollar book."

Unlike most war pics, the underdogs don't win in the end: Mayor Giuliani's quality-of-life campaign dispersend much of the community captured here.
See complete review @ http://www.bookwarsmovie.com/reviews_pr/page6/page6.html


This purchase includes a non-assignable, non-transferable license agreement granting public performance rights (PPR) for classroom, organizational, institutional, or library use by the acquiring puchaser for non-paying audiences only.

TERM of LICENSE: PPR license is the life of the originating DVD

Contact Camerado at camerado@camerado.com with inquiries regarding other uses, Digital Site License, commercial exhibition, or to request an online screener link.

'BookWars' is produced by Camerado

Physical DVD-R with Custom artwork Only $9.99 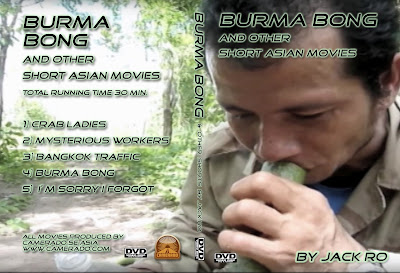 1) CRAB LADIES - Cambodia, 2011 (Running Time 10:30) A dreamlike, impressionistic portrait of crab selling ladies of coastal Cambodia. ** Official Festival Selection, Chagrin Falls Documentary Film Festival **  2) MYSTERIOUS WORKERS ATOP BOKOR MOUNTAIN  - Cambodia 2012 (Running Time 5:30) The old French colonial hill station atop Bokor mountain in Cambodia is currently being renovated (in 2012) into a modern mega-resort and casino. All that remains of the old hill station are a few dilapidated structures...and a curious UFO-shaped tower. An army of mysterious workers silently construct the new project - but are they being subliminally guided by the UFO-shaped object?  3) BANGKOK TRAFFIC - Thailand, 2012 (Running Time 2:10) Gorgeous and surreal time lapse based movie featuring traffic flow patterns in Bangkok, Thailand. Composed of thousands of individual high resolution photos - requiring 24 photos for a single second of video. ** Official Selection, 2013 Florida Film Festival **  4) BURMA BONG - Myanmar (Running Time 10:16) A group of hikers leave their passports behind, take a shotgun and a rifle, and head into the remote forests of Myanmar. Once in Burma, a pair of kindly rangers make a bong from bamboo in the surrounding forest and fire it up...demonstrating the ultimate in 'green travel'  5) I'M SORRY I FORGOT - Cambodia, 2010 (Running Time 1:00) A cameraman, an orangutan...and a missed meal! ** Official Selection Florida Film Festival / Official Selection New Filmmakers NYC **

See & share 'Burma Bong' by itself
(without other movies) below...

An iTunes Logo for Filmmakers

An iTunes Logo for FILMMAKERS

While poking around online for an iTunes logo for independent filmmakers, I noticed there wasn't much besides the standard iTunes logo for musicians - nothing specifically geared for filmmakers selling their movies on iTunes.

So, I decided to make an iTunes logo first and foremost to promote the purchase of our feature road movie, 'Lost in New Mexico: The Strange Tale of Susan Hero' and 'BookWars' on iTunes.

Feel free to download and use this custom iTunes logo for filmmakers - if you enjoy this logo, kindly make a contribution in any amount to our ongoing creative services for indie filmmakers

Notice that the URL for the movie is at a diminished opacity, so filmmakers can take this iTunes logo and overwrite that section with their own URL quite easily.

Contact us at camerado@camerado.com with any inquiries
Posted by CAMERADO at 7:55 PM

Help us get our newest Asian movie, the US-Vietnam War era drama made in Cambodia, FREEDOM DEAL, below, into worldwide festivals - support global indie film @ http://www.indiegogo.com/Freedom-Deal-Festivals

CamboFest's 2009 Re-Discovery and Revival of a Vintage Cinema in Southeast Asia, 'The Royal' in Kampot, Cambodia

Just back from Kampot, Cambodia, location of the historic CAMBOFEST, Cambodia Film Festival (www.cambofest.com), 3rd edition, where CamboFest staffers re-discovered and revived the once popular vintage Cambodian cinema house, the ROYAL (established in 1955 or so) 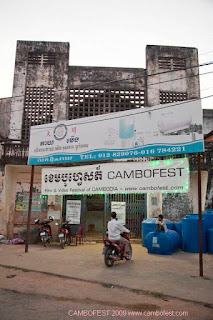 As seen in previous coverage from that CamboFest event, the Royal had been unused since 1986, and had been completely forgotten by most, including all long time expatriates in the region. However, many older Cambodian Kampot residents remembered the old vintage cinema house very well.

In 2009, CamboFest staffers including coordinator Phun Sokunthearith (Mr. Tol) and founder/co-organizer Jason Rosette had stumbled upon the old venue while searching for reputed vintage cinema houses in the area.

Among those venues visited were two of the other original cinema halls in Kampot, the Makara ('January') and the Santhapeap ('Friendship'). However, the Royal did not stand out as a cinema house at first: it was being used as a water jug storage arehouse and only the latticed deco marqui hinted at its former role as a movie house.

Thus, Mr. Rosette and Mr. Tol sleuthed out the family who still lived in the former venue, and met with Mr. Chea Sokan and his wife, Mrs. Sim Mala.

Reviving the old cinema house had not been accomplished previously, and it had remained completely unused as a venue since 1989 when it was last shuttered.  Thus, there was some hesitation at first, as well as any lack of formal workflow regarding the approval process with the local Privincial governor's officer or the Ministry of Culture and Fine Art in Phnom Penh.

After many many meetings over the course of several months, the family agreed to allow the festival to take place in the 'Royal' if the proper permissions could be obtained from the Cambodian authorities.

A vigorous stretch of grass roots fundraising commenced. After many meetings with local authorities, some interesting and startling intrigue occurred within the local political sphere and foreigner-dominated art scene, which seemed to arise from a mixture of contemporary (foreigner-dominated) art world rivalry, mingled with the awakening of a long-latent antipathy coming from the former owners of the now-defunct Makara cinema house, which had been one of the original competitors of the Royal long ago.

With a significant amount of out of pocket expenses balanced by the generosity of worldwide contributors and a modest grant from the US Embassy in Phnom Penh, the 3rd annual CamboFest Cambodia Film Festival succeeded for the very first time in bringing the vintage Cambodian cinema house, The Royale, back to life once again!

This brings us to the present: since the original 2009 grass-roots, bootstrapping revival of the vintage cinema house, 'The Royal' by CamboFest staffers Mr. Tol, Jason Rosette and others for the CamboFest, Cambodia Film Festival, several more film & cultural related efforts have taken place at the Royal, solidifying the venue's undisputed revival as a functioning cultural venue once again.


IN OTHER NEWS: One of Kampot's three last remaining vintage cinema houses, the Makara 7 (7th of January), has been partly town down to allow the construction of a new hospital. Only the front facade of this striking new-deco structure remains...

Balancing the loss of the iconic Makara 7, at least the Royal has now found a new place on the cultural scene...

http://www.youtube.com/movie?feature=plcp&v=6Qu-CIujtdE (may have limited accessibility outside the US)