Back by popular demand - behind the scenes at a film festival in Cambodia, CAMBOFEST

Jason 'Camerado' Rosette Back by popular demand! An amazing behind the scenes look at the making of an independent movie event in Cambodia:

FREEDOM DEAL, Camerado’s 3rd feature, is a Vietnam War-era dramatic social issue feature (such as ‘Hurt Locker’ or ‘Blood Diamond’) which takes place in Cambodia during the 1970 US/ARVN military effort to locate and destroy communist sanctuaries along the Cambodia/Vietnam border.

This never before told story is told from the point of view of a Cambodian boy and his friends as they search for sanctuary from the growing conflict on their doorstep.

Camerado staffers Jason Rosette and Phun Sokunthearith (aka ‘Mr. Tol’) now embark upon Phase II of development, a script development and workshopping session on location in Cambodia, where writer-director Jason Rosette has lived and worked for more than half a decade.

Our unit should be looking for us...they know we’re missing.

Where are they from, Uncle?

They seem to be with the foreign armies. There are many these days...from the North and South of Vietnam, for instance. Then there’s Lon Nol’s army, though I miss the King terribly. I think our poor luck now is due to his departure.

Let’s see...there are the country guerillas, from Vietnam and our own countryside rascals, the ‘Khmer Grahorm’.

The Cambodian communists - the Red Khmer. The Barangs call them ‘Khmer Rouge’...

Some talent and locations in Cambodia have already been secured, including military personnel with hardware who served in the Lon Nol and Khmer Communist (Khmer Rouge) armies.

Information about FREEDOM DEAL, and ways that you can help jumpstart the project, can be found at the following page:

All contributors will be duly credited and will receive special rewards! (see the FREEDOM DEAL page at http://www.camerado.com/freedomdeal) Significant contributors are welcome to accompany the production on the research sessions, and co-production and presale inquiries are welcome.

Submissions for Cambodia’s first and longest running film festival since the end of the Khmer Rouge era, CAMBOFEST, Cambodia, continue through the end of October (official deadline).

Last year, CamboFest rediscovered and brought back to life (on an out-of-pocket, bare-bones, grass roots budget) the once popular “Royal’ cinema house in Kampot, which had fallen to ruin during the Khmer Rouge era (see the historic photos on the CamboFest blog here--> http://cambofest.blogspot.com/2009/12/initial-pix-content-from-cambofest-2009.html)

The 4th edition of CamboFest, will feature a ‘Best of’ selection from the first three years of the event, plus new independent features, documentaries, shorts and animation from around the world.

A selection of movies from independent filmmakers from Southeast Asia will be featured, thanks in part to CamboFest’s ‘Friendship Festival’ in the region, the Camerado-produced BANGKOK INDIEFEST (www.bangkokfest.com) – but be on the lookout for filmmakers beyond Thailand and Cambodia as well!

(More information about the Southeast Asia Filmmakers Exchange can be found on our Facebook location @http://www.facebook.com/group.php?gid=153622188009351)

Also included at the next CamboFest will be the (very) long awaited Cambodian premiere of Robert Flaherty’s pioneering docu, ‘Nanook of the North’ (http://en.wikipedia.org/wiki/Nanook_of_the_north) considered by many to be the first feature length documentary, with the kind permission of the Flaherty Seminars, Inc...a full eighty eight years after its initial release.

CamboFest is a grass roots, private sector event with extremely limited funding; we utilize every Riel of our supporters’ contributions to keep Cambodia’s only independent movie festival alive.

Consider contributing to the upcoming edition of CAMBOFEST, Cambodia – amongst items needed for the next edition are: a new diesel generator, lighting for vintage (unrestored, pre-Khmer Rouge) Cambodian venues, and upgraded exhibition hardware.

At the 2553/2009 Edition of CamboFest, for instance, local Phnom Penh photographer and arts supporter James Mizurski kindly contributed towards the construction of a customized movie screen to fit the vintage Royal Cinema in Kampot, re-discovered and brought back to life for that year’s fest by CamboFest staffers...

And the ‘James Mizurski’ movie screen lives on to be used at future fests...

501 (c) 3 Tax deductible contributions to CamboFest can be made through our fiscal sponsor, the Media Alliance, here-->

The 2554/2010 Edition of CamboFest will train more Cambodian staff to handle more essential duties, including programming and other areas, while Western principals draw down to a degree.  Media programmers, practitioners, and volunteers of all kinds are welcome to offer their skills and crafts towards this unique, ongoing effort.

=> Get DVDs of Camerado movies for the lowest price direct from the factory and $AVE while supporting our projects!

Sales of our DVDs and other content get plowed back into our projects – please consider any purchase to be a contribution to Camerado’s ongoing efforts.

> Short movies by Camerado including the hilarious rock n’ roll documentary, VUTH LEARNS TO ROCK, the outlandish HOLLYWOOD BLACKOUT, and others

=> Updated IMDB and other information for CAMERADO, Camerado SE Asia

Please take a moment to update your contact sheets with the latest info from Camerado founder, filmmaker and writer-director J Rosette; his info can be found at:

and at IMDB Pro:

You made it this far? Take a look at Camerado’s very first independent effort, shot in *1991* (under the name 'Flaming Monk Films) on glorious 16mm film, called ‘Charlie’s Box’, seen here at Vimeo-->

Fundraising outreach will soon commence to support this component, in the meantime, pls see http://www.camerado.com/freedomdeal for more information


A photo with late, great Cambodian ‪#‎filmmaker‬ Yvon Hem, who we awarded the Grabay Meas 'Golden Buffalo' trophy for his ‪#‎movie‬ 'Shadow of Darkness' at the CamboFest, Cambodia Film Festival. He was also an advisor for our ongoing movie project, 'Freedom Deal'. Despite his monumental life's work, Mr. Yvon Hem had at the time not yet been awarded any kind of official recognition...so it was our honor and pleasure to provide him with this award trophy! 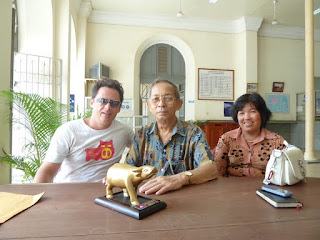 ...visit Camerado's page at Podomatic for more information and to track the progress of this new and unique feature movie project by Camerado! => http://camerado.podomatic.com/entry/2010-10-10T01_35_45-07_00

'Have Forest, Have Life', (2006) a documentary about biodiversity values in the remote Cardamom mountain region of Cambodia. Produced and directed by Jason Rosette of Camerado SE Asia www.camerado.com for clients WildAid (Wildlife Alliance), Conservation International, and Fauna and Flora International.  Wildlife photography/videography by Allan Michaud and Jason Rosette.

"This was a very challenging, but ultimately successful and enjoyable collaborative effort between three significant wildlife NGOs working in Cambodia today: Wildlife Alliance (then WildAid), Conservation International, and Fauna and Flora International.  I commend these three organizations on their ability to seamlessly harmonize a unified approach and method in this particular project.

Production required that we venture into some pretty remote areas, and we carried all of our gear on small motos - with skillful drivers to handle the incredible and steep terrain. Even our generator and lighting gear was carried on the back of our motos, so everything had to be downsized accordingly.

We took motos into Chiphat, which apparently now is a very happening eco-tourism destinations...I haven't been there since then, though I'm planning another trip with a potential upcoming documentary project. Anyway, at the time, in 2006, it hadn't been developed yet and the locals were still engaged in some destructive income-generating activities that have now somewhat been replaced by eco-toursim.

I have significant experience in both fiction and documentary formats, so one of the things I like to do with any of the docu projects I'm working with is to bring in a 'cinematic' element, whether this be through the use of enhanced sound design, or even the casting and staging of talent to re-create key moments that would otherwise be left to talking heads.

Since the target audience for Devcomm media like this is often the local community, they tend to have a different (lower) threshold for documentary content that is purely testimony driven, so the more compelling the story-driven elements, the better for delivering the required prosocial content.

This factor is one way that my commissioned work stands out from the rest of the pack - it's a very hands on, customized approach that requires an incredible amount of extra work and attention, but the work endures as a result.

I'm told by Mr. Norn, the Cambodian narrator for "Have Forest, Have Life", that even now, several years after its release, the DVD for 'Have Forest Have Life' is sought, borrowed and played just for fun by local community in his commune...

My background in Film & TV (BFA from New York University, Tisch School of the Arts - Trustee Scholar), combined with my knowledge of development issues (MA in Development Studies, Royal University of Phnom Penh) allows me to approach each development media project with a balanced 'entertainment-education' perspective...pls see my final report from RUPP here:

Organizations or agencies in SE Asia who are seeking a highly distinct, watchable, and enduring documentary or promotional video, feel free to drop me a line here, I'll be happy to offer feedback on your inquiries -->